Chemistry in the Atmosphere 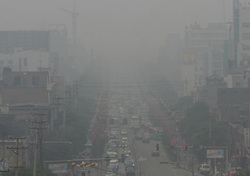 Air pollution is mainly the result of industrialization and the widespread use of vehicles. In engines of trucks and cars, nitrogen and oxygen react to form nitrogen monoxide, which is immediately oxidized in air to form nitrogen dioxide. After absorbing energy from sunlight, the nitrogen dioxide breaks up into nitric oxide and free oxygen atoms. The free highly reactive oxygen atoms then react with oxygen to form ozone, also highly reactive, and when absorbing sunlight, breaks up into an energetically oxygen molecule and atom. The atom reacts with water to form two hydroxyl radicals (OH), a highly reactive oxidizing agent that can react with unburned hydrocarbons to produce hazardous compounds. The end product of this reaction is called photochemical smog.

Production of electricity is also a major contributor to pollution. When sulfur in coal is burned, it combines with oxygen to form sulfur dioxide, which oxidizes in air to form sulfur trioxide. Sulfur trioxide can combine in water to form sulfuric acid, which can cause the destructive acid rain, capable of eliminating life where it rains.