Kinetic Molecular Theory attempts to explain why gas molecules behave as they do. It is based off four central tenets.

1. Gaseous molecules have no volume

2. Collisions between gaseous molecules are elastic (no energy is gained or lost)

3. Gaseous molecules have no attraction with one another 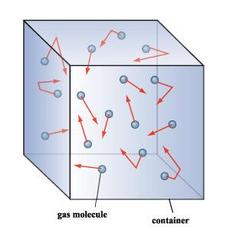 An increase in temperature increases the kinetic energy of particles, resulting in the particles colliding with the walls of the container with greater force and frequency, thus increasing the pressure of the container.

Increasing the temperature increases the force and frequency with which gas particles collide with the container of the walls. An increase in volume is needed in order to compensate and keep the pressure constant.

An increase in the number of moles of gas results in more collisions with the containers of the wall, thereby increasing the pressure. In order to compensate and keep the pressure constant, an increase in volume is needed, assuming the temperature is kept constant, in order to counter the increased gas particles.