Gay Lussac's Law states that at a constant Volume as pressure of a gas increases, the temperature will increase proportionally.  This can be represented mathematically by the equation P = kT. Plotting temperature against pressure yields a line 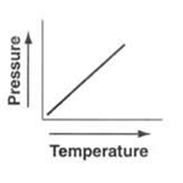 1. Andrew bought a bag of chips in Tahoe at a pressure of 650 torr and a temperature of 50.0 °F . Andrew then went with his friends, Brian and Gabe, back to San Ramon. The weather forecast says that San Ramon has a temperature of 77.0 °F. If the bag has a maximum pressure of 1.10 atm, will the bag pop when they arrive back in San Ramon?

4. A pressure pump pumps 5L gas per second. A reading of the container was measured after so many seconds. The temperature from 1 second to 7 seconds is 400°C . What is the initial Temperature and what is the change in temperatuer if the change is the same per second?