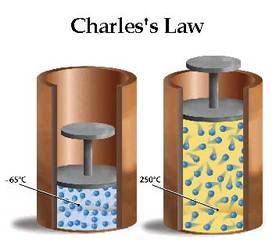 What is Charles's Law?

Charles's Law states that the temperature and volume of an ideal gas are directly proportional. This can be represented mathematically
by the equation V = kT. Plotting volume against temperature  yields a straight line with y - intercept at 0. 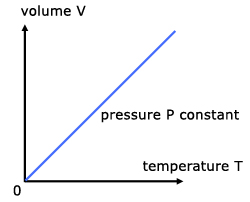 In other words, to calculate the change in volume for temperature after a change in the other variable, the equation could be written as Vinitial / Tinitial = Vfinal / Tfinal.

1. A stretchable plastic bag was inflated to 100ml of gas at room temperature (21°C). After the leakage in the bag, there was only 20 ml of gas. What is the temperature of the gas?

2. A hot air ballon with a volume of 2L started at the ground with the flames running. The balloon went from room temperature to a blazing, hot temperature of 150°C. After the flames ran for some time, what was the final volume? (assume that no air was released in the process and the baloon would not blow up)

4.A rubber tire is currently 75% full at 35°C. It is an extremely, hot day and reached 55°C. If the the rubber can only reach a maximum of 105% pressure before exploding, will the tire explode at 55°C.